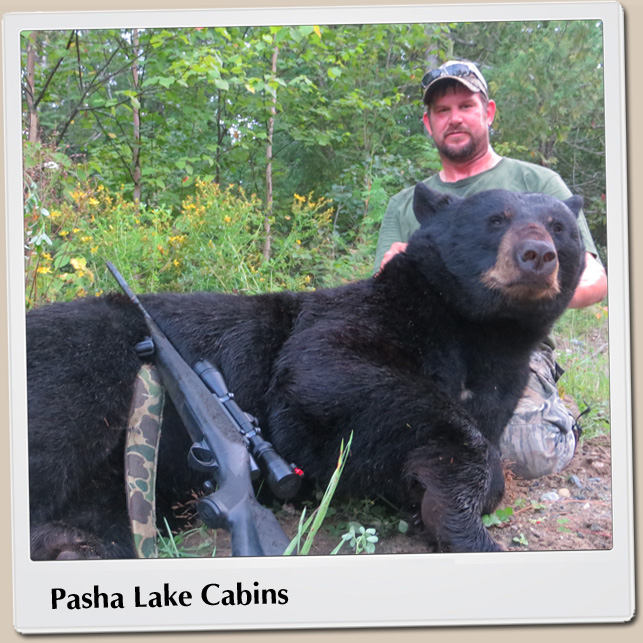 Ontario is well known for Hunting. Since the cancellation of the Ontario spring hunt, there has been a population explosion of Black Bears. Because of the high population of bruins and the way they are spreading out all over Ontario to find new territory, every lodge listed in this website has top-quality hunts with many trophies over the 400 pound mark being taken. Some lodges have had guests in the last couple of years harvest bruins in the 500-pound range and even a few over 600 pounds.

Spring hunting season runs from May 1st to June 15 in Ontario. Fall hunting starts in mid-August and usually runs until the end of September with a few outfitters that are farther south having hunting into October.

Studies have estimated that the population of Black Bears in Ontario (including cubs & yearlings) is over 200,000 and that number keeps growing. Some studies suggest there are more, which is the largest concentration in Canada. There are so many that they are being forced to come south into Central and Southern regions where after 100 years of their absence, rural communities are experiencing problems again. Rouge bears have even been seen as far south as Northern Toronto - (GTA)

The scientific name for the Black Bear is Ursus Americanus. It's also referred to as the American Black Bear in order not to confuse it with other similar sub-species found in Asia and Europe. The highest concentration in orth America is located west of the southern region of James Bay and across Northern Ontario and into the wooded areas of Manitoba before the Prairies start. The stretch of boreal forest south of James Bay is where the hot territory starts and this ribbon of perfect habitat grows thicker and farther north as you travel west. It has been referred to as the Black Bear Triangle. It's basically following the tree line to the north and human populations to the south.

By the time a cub is two years old they reach about 100 pounds and are on their own for the first time. Independant cubs get chased out of prime territories and since there is no food above the tree line their only alternative is to travel south where they are becoming a nuisance in towns in Northern Ontario and central Ontario and hunting is the logical way to control their population. Without Hunting in Ontario many 1000s of bears would starve to death or be killed by bigger territorial bears. The average size that hunting guests might see in Northern Ontario is around 200 pounds but hunters harvest many bears in the 300 to 450 pound range. They can get a lot bigger than that. In 2010 a 1000 pounder was hit and killed by a logging truck between Wawa & Chapleau. In 2011 an 890 pound bear choked to death on a plastic bag at the Nipigon dump. Both these bears have been documented by the Ministry of Natural Resources (MNR).

They are omnivores, which means they eat anything. Their prime food is grasses, Blueberries, Raspberries, bugs, grubs and Beavers. They will eat anything but above is the primary diet of wild Black Bears in Ontario.

If you are at a dump in Ontario to view the bears you can observe them ignoring meat, fruit and vegetables and going after food with high carbohydrate content such as bread and pasta. They go after these high carb snacks because they can build up their fat supply faster. Experienced outfitters know this so when baiting bears to come to a tree stand they use a wide range of food including food high in carbohydrates.

What Anti-hunting Groups Say: People say you are just killing, not harvesting big game. Nothing can be farther from the truth. A Black Bear can hear 4 times better than a human and can smell 2100 times better than a human. Black Bear Hunting is an exercise in stealth, which can be hard to do sometimes when spending hours out in the Ontario wilderness. A hunter's ability to become invisible is key to successful hunting. Hunters also need to understand that there are tons of huge bears in Ontario and they need to have confidence and pass on smaller bears if they really want a trophy of a lifetime.

Hunters are legally allowed to use bow (archery), crossbow, rifle, shotgun and muzzleloader (Black Powder) to hunt bears in Ontario. It is illegal to hunt with a hand gun in Ontario. The weapon used dictates the season so archery season starts a couple of days before gun season. Hunter orange must be warn at all times during big game season. Camouflage hunter orange does not qualify in Ontario.

Cinnamon Black Bears and Chocolate Black Bears are also available in Ontario. Once in a while hunters are lucky to harvest a rare Sun-Crest Bear. This is a Black Bear with a white crest on its chest. The Sun-Crest Bears are mostly hunted in regions north of Lake Superior from the Missanabie / Wawa region across to the Nipigon region. There have been sightings of Blue Black Bears but as of yet the Ministry of Natural Resources (MNR) officially says they do not exist just like Cougars, which there are 1000s of eyewitness sightings each year in Ontario. A Blue Bear is black with shimmering blue fur if the light is hitting the animal at the right angle to reflect the blue wavelength. Below is a picture taken in 2014 of a beautiful 400-pound Cinnamon Bear.

The menu at the top lists fly-in hunting camps and drive-to lodges. Housekeeping, American Plan and modified American Plan are available as well as tent and RV camping accommodations. Some lodges offer combo fishing / hunting trips. Even if a camp does not have guided packages in most cases they can hire a guide if you request one. Most bear hunting outfitters in Ontario offer non-guided hunts.

Fall bear Hunting in Ontario starts around mid-august. In some regions Archery / Bow hunters can start earlier than Rifle and Black Powder / Muzzleloader hunters. The Ontario bear hunting season usually runs from Mid-August to the second or third week in September, depending how far north the hunting outfitter is located.

Spring bear hunting season runs from May 1 to June 15. These dates are stupid because 95% of lodges do not open for business until the Walleye opener in mid May and with hunting lodges in the far north there is still three feet of snow on the grown and the bears are hibernating. Realistically most hunting outfitters are running their hunts from mid to late May until June 15 depending how north they are located. The advantages of spring hunting are that the bears have much nicer coats and their meat tastes 100 times better.

A non-resident Ontario bear hunting license is $236 and the hunting export fee for the meat & fur is $35.

If you are looking for an Ontario bear hunting trip and don't know where the best hunting in Ontario is than I can help. There are hundreds of hunting lodges and finding the best hunting can be frustrating. Email me at gary@blackbearheaven.com